Susan Hoffinger is a founding partner of The Hoffinger Firm, PLLC. Her practice focuses on white collar and non-white collar criminal defense, civil litigation, both state and federal, as well as regulatory matters and internal company investigations. Ms. Hoffinger previously served as an Assistant District Attorney in New York County for eight years from 1992 to 2000, and has been practicing as a criminal defense attorney for the past 20 years. She has been selected by New York Super Lawyers for excellence in White Collar Criminal Defense annually since 2008 and in 2018 was selected as one of Top 50 Women New York Metro Super Lawyers. Ms. Hoffinger also has an AV Preeminent rating from Martindale-Hubbell and was selected by the Bar Register of Preeminent Women Lawyers.

Ms. Hoffinger is also a zealous advocate for college/university students accused of, as well as those who are victims of, sexual misconduct under Title IX.

Ms. Hoffinger was selected as one of the Top 50 Women New York – Metro Super Lawyers for 2018 and featured in the article “The Winning Ticket.” She has been selected annually as one of New York’s Super Lawyers for Excellence in White Collar Criminal Defense since 2008. She is also rated AV Preeminent by Martindale-Hubbell Peer Review and Selected by Bar Register of Preeminent Women Lawyers.

Before founding The Hoffinger Firm, Ms. Hoffinger was a partner of Hoffinger Stern & Ross LLP. Prior to that, she spent 8 years as an Assistant District Attorney in the New York County District Attorney’s Office, in the Frauds Bureau, Asset Forfeiture Unit and Trial Division. 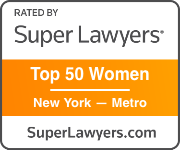